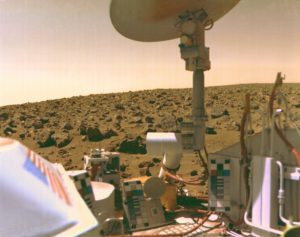 We had a good turn out of members and guests for the North Lincolnshire astronomy society meeting on Monday 2nd December 2019.

As it was the last meeting before Christmas, Glenys and Malcolm treated us to some mince pies in addition to the usual teas and snacks. All of which went down well.

Paul Money was the speaker on the night, who gave us as excellent (as always) talk called The Vikings at Barsoom part 2. This was a very entertaining talk about the Viking 1 and 2 missions to Mars. This included some impressive images from the red planet, and lots of facts and figures about the missions. Who would have thought that simple human error ended one of the missions, and how close the two Viking landers were to landing on large rocks, that may of ended the missions before they began to gather information.

This entry was posted in News and Blog and tagged north lincs astro society. Bookmark the permalink.