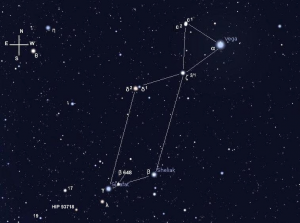 After dusting off my Bedford catalogue book by Admiral William H.Smith, I felt compelled to start seeking out some of the early observations. 1st on the list was a lesser known double star in Lyra called 17 Lyrae. Many observers go straight to the double double close to Vega for a test of optics. Yet , like with many constellations, there are some lesser known doubles which are hidden gems. So lets have a look at the star 17 Lyrae.

This is an easy object to find, just a star hop from Gamma Lyrae as shown on the image (courtesy star-splitters, word press . com).  According to the older Beford catalogue the magnitudes are 6 and 11 with a gap of 2.9 arc seconds, where one of the latest updates quotes as 5.1 and 9.1 with a gap of 3.5 arc seconds. The combination of a narrow gap, and the large range of magnitudes makes this a challenge for many amateur scopes and the UK seeing conditions.  According to the Bedford catalogue this beautiful and delicate object was discovered with the Dorpat refractor.

So on to my own observation of this double star. To repeat, its an easy star hope from Gamma Lyrae with the finderscope. My telescope used was my trusty Skywatcher 12″ Dobsonian. Once centred, I used my 5mm TMB supermonocentric eyepiece. This gem of an eyepiece is my number one choice for high magnifications. Owned it now for about 30 years and never used a better planetary eyepiece. On the Dob, this gives 300x magnification. The bright glare from the primary, dwarfed the dimmer companion, making this a test of optics. But the gap was clear (if tiny), and I was able to clearly make out the secondary star. I spent some time looking at this double star, which had a few other stars in the same field of around 8th – 10th magnitude, making for a beautiful cluster of stars.

It is looking at objects like this, that remind us about the appeal of visual observations, at a time where many budding astronomers who purchase a new telescope are only interested in astro imaging. Go out yourself and try and capture this double star. I am guessing a well collimated 4″ of greater aperture and 250x magnification will be needed

This entry was posted in News and Blog and tagged double star. Bookmark the permalink.