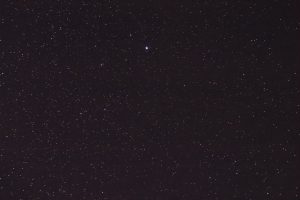 I took this image of Lyra wide field using a Canon EOS 1100D + a vintage Vivitar 50mm f1.8 lens. By chance the Ostara 2″ Moon / Skyglow filter rests on the 49mm thread lens, but does not screw in. Providing the camera is pointing up it should not fall off. But you could tape into place if you wish.

So as always I use magnified live view for accurate focus. Thinking f1.8 would have poor edge of field coma, I stopped down to f2.8. Coma was still bad, so I set it at f4 which cured the problem.

After some trials at different exposures on an tripod with no tracking, I found that 13 seconds was the most I could go without too much trailing. ISO was 6400. Despite the skyglow filter removing most of the orange skyglow, there was still much processing to be done.

Software used was Canon digital photo professional 4. With this the image was sharpened and chromatic aberration and luminance noise reduced. Used the curves to darken the background sky and enhance the stars. As a final touch I reduced magenta to remove the last of the skyglow

This entry was posted in Images and tagged astrophotgraphy, filter, ostara. Bookmark the permalink.