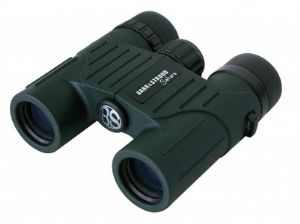 I had the chance today to test the subtle differences between the Barr and Stroud Sahara 8×25 and 10×25 binoculars.

For starters they came in a different design of box. The 10x came in a largely white box with the binoculars image on it. While the 8x came in a more colourful one. I know that this will vary depending on which batch you have bought from

Both binoculars look and feel the same. The 8x focus wheel was slightly more free moving. But I would imagine this again like the boxes will vary. Both are minor details, rather than an issue.

So what about the optics…There is a slight brightness / contrast increase with the 8x, with also a wider view..That said, the brightness difference was very minimal and most certainly not a problem in cloudy conditions with the 10x version.

Chromatic aberration and edge of field bowing was equal with both sets, and well within tolerances for compact binoculars in this price range

Surprisingly eye relief was about the same on both. Meaning both sets could be used with spectacles on.

One big difference that may be an issue for some users is depth of field. On the 10x we found you needed to work the focus wheel more to keep sharp focus..On the plus side, for all work except close up observations a 1/4 turn of the focus wheel was all that was needed

Summing up. Both are great sets on compact binoculars for a range of uses. The 8x with its wider field of view and larger depth of field may be better suited to fast moving wildlife. The 10x would be ideal for more distant targets where less panning is used

Both sets are highly recommended  by, and can be purchased from Northern Optics

This entry was posted in Barr & Stroud Binoculars Reviews and tagged barr and stroud. Bookmark the permalink.